A Gorgeous Globetrotter’s Guide To Capri

There’s an old saying that no trip to Capri is complete without purchasing three souvenirs: Capri sandals, Limoncello liqueur, and local perfume. So here’s how to spend your day in this glorious Italian town – after you’re browsed all the designer shops on the Via Camerelle, had an espresso at the Piazzetta, and treated yourself to a gelato.

But before that, some Capri highlights include:

• Renting a scooter to visit the lighthouse and Blue Grotto
• Visiting the church of San Michele, featuring an ornate handpainted floor depicting Adam and Eve
• Enjoying at cocktail – and watching the beautiful people – at the bar of the five-star Hotel Quisisana

Here’s what I did on my day there – and I can’t wait to return.

You can’t visit Capri without purchasing Limoncello, the delicious sugary lemon liqueur. This is what I love about buying gourmet goodies abroad: They are treats in every way, not expensive, and they make unusual souvenirs for yourself or others.

Probably the world’s best is Limoncello di Capri, www.limoncello.com. Limoncello di Capri is the only company in the Italian industry that embraces strict control over the whole production process, from raw lemons to end product. On the rocks or mixed with other drinks, Limoncello is also yummy on ice cream and fruit salads, and in pastry-making. Thanks to its qualities and versatility, this is probably the best-selling brand in bars and restaurants all over Italy.

Next, head over to Carthusia, which has two perfume stores in town along with its factory. Here, you can explore, explore, explore, and purchase the specialty fragrances that were first created in 1380 by nearby monks at the Monastery of St. Giacomo. Indeed, “Carthusia” is the Latin word for “cloister.” Today, the limited production, and handmade methods used by the Carthusian monks, are still in practice. The brand’s bestseller is the Fiori de Capri, with its notes derived from lily of the valley along with carnations. Other scents include Aria de Capri containing the essences of lemons and oranges, and, for men, Mediterraneo, containing citrus and green tea. Just sampling the merchandise is quintessentially Italian; their fragrance strips, which you can spritz to your heart’s content – are beautiful, colored depictions of female characters from the nearby Teatro di San Carlo in Naples. The opera house even has its very own Carthusia fragrance, called Prima, which is a mix of bergamot and rose. www.Carthusia.it

Lastly, you need to purchase a pair of the handmade, custom-fit sandals that Jackie Kennedy made famous in the Sixties. Who can forget the inimitable shots of her strolling the Italian island’s cobblestone walkways, looking oh-so-chic?

The tony streets of Capri boast several sandal-makers, but the most prestigious company is Amedeo Canfora on the sun-splashed Via Camerelle. Today it is owned and operated by Costanzo Canfora, whose grandfather, Amedeo, in 1946, founded the company.

Amedeo Canfora’s shoe business shot to international prominence back in 1962, when Jackie Kennedy, visiting the island as First Lady, made a midnight visit to Canfora, while on a trip to the Amalfi islands. She apparently was traveling with friends, who suggested that she procure a pair of the elegant sandals that Canfora was known for – and which the store had previously made for Princess Margaret and Grace Kelly. “Mrs. Kennedy came around midnight — she was a size nine – and she ordered several pairs of sandals, which we shipped to her,” says Costanzo Canfora today, inside the tiny shop. “My grandfather made her a style especially for her, called the ‘K.” That style consists of a webbed design of silver interlocking chains, which today would cost about $390.

Inside the store, there are several large photos of Mrs. Kennedy gracing the walls, which were taken that memorable night when she stopped by the sandal boutique. There’s also a fascinating store log book – number 19 to be exact – which displays the page where Mrs. Kennedy had her right foot traced, so that Amedeo Canfora could know her precise foot measurements. The page says, in Italian, “Wife of President Kennedy” at the top, and also her foot’s measurements – 22 ½ being her measurement from her big toe to her little toe, and 23 centimeters over her arch.

Today, Amedeo’s two daughters, Angela and Rita, still handmake the sandals in the same way that they always have, sitting in cramped quarters surrounded by a sea of Italian leather, shoe boxes, wooden foot lasts, and staple guns.

Prices start at about $189 for a simple thong and go up to about $550 for the most expensive pair, in crocodile, or extensively jeweled. If you purchase on the internet, the store ships internationally via UPS, and promises you’ll receive your sandals in anywhere from four to 15 days. The ‘K’ in gold or silver is the bestseller, says Costanzo, but other glamorous styles abound, from the ‘Gail’ sandal with a simple T-strap, to the bejeweled ‘Sophie’ bearing fake rhinestones, even to sandals with little authentic Capri bell charms attached – so everyone can hear you coming. Bells are also one of the traditional symbols of Capri, which ring in good fortune according to local legend. These historic lucky charms have designs inspired by the landscapes of Capri and Sorrento. So — Happy walking and sightseeing!

Debbi Kickham can be reached through her websites at www.Gorgeousglobetrotter.com and www.MarketingAuthor.com. She is a luxury travel provider and travel content provider and marketing consultant and also the author of the bestselling book, The Globetrotter’s Get-Gorgeous Guide and (co-author) Off The Wall Marketing Ideas. Debbi is also Chief Content Officer at Maxima Marketing in Westwood, Mass. 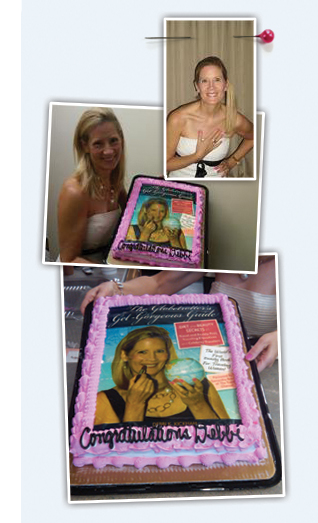